Flinn Foundation reports paint a rosy picture of how biosciences are driving the state economy and demand for Tucson bio space.

Bioscience is a strong engine that’s driving the Arizona economy. And activity for Tucson bio space is helping to fuel that engine.

The Flinn Foundation, a philanthropic grant-making organization, showed in its 2017 progress report that Arizona 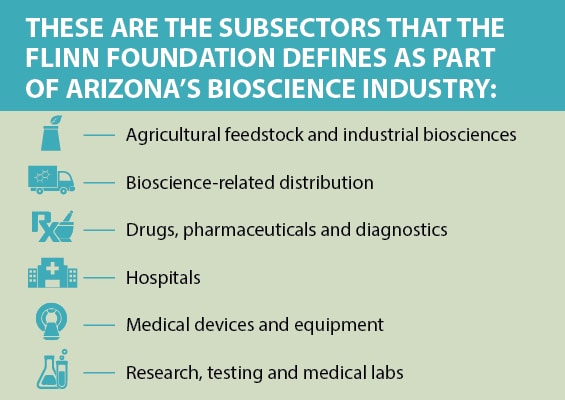 A deeper look at the state’s highlights in bioscience activity shows several contributions by Tucson companies, the University of Arizona (UA) and organizations.

The UA, as well as Arizona State University in Tempe and Northern Arizona University in Flagstaff, will use $1 billion from bonds for new infrastructure that will include more bioscience research facilities.

The UA ranks 58th out of 225 United States universities with tech-transfer activity, according to the Milken Institute.

UA startup SinfoníaRx, which provides medication management services, was sold to a New Jersey company for as much as $131 million.

The FDA gave market authorization to Accelerate Diagnostics for its antibiotic susceptibility testing.

Critical Path Institute (C-Path) formed a partnership with the Translational Genomics Research Institute (TGen) to use a $1.1 million grant from the Bill & Melinda Gates Foundation to study tuberculosis drug resistance.

C-Path launched a type 1 diabetes consortium to explore treatment and prevention of the disease.

The UA got a $4.8 million federal grant to develop a vaccine to protect dogs from valley fever.

The UA received $15 million from the U.S. Department of Agriculture to create the Sustainable Bioeconomy of Arid Regions Center. It will focus on biofuels, bioproduct and renewable biological resources.

Scientists at the UA genetically engineered corn to be resistant to cancer-causing aflatoxin.

A partnership of TGen, HonorHealth (a health services network) and the UA used a $5.1 million federal grant to develop a test that detects pancreatic cancer before symptoms appear.

An Oro Valley student won a scholarship to the UA for research into a potential treatment for Parkinson’s disease.

The UA College of Medicine secured full accreditation for its Phoenix medical school. The university opened its $136 million Biomedical Services Partnership Building on its Phoenix Biomedical Campus. It includes labs for health research.

The fast pace of creating and filling Tucson bio space continues. The UA is constructing state-of-the-art research labs for its College of Pharmacy. It’s raising a building of learning space, clinical labs and simulation centers for use by medicine, nursing, pharmacy and public health students and faculty.

Lab and research space also is planned for the UA Tech Park at the Bridges. Innovation Park in Oro Valley continues to foster a hub for bioscience research, development and manufacturing.

I like to point out that support businesses are crucial to creating a thriving bioscience industry. Professional and administrative services, construction trades and suppliers all are part of the Tucson bio space. As the industry grows, so do other business opportunities that eventually turn Arizona into a bioscience hub.

About Michael Coretz
In my 25-plus years as a commercial real estate tenant representative, I’ve picked up a wealth of information and expertise. I’m passionate about making sure that corporate users, tenants and buyers like you get a fair deal and the best solution for your business’s bottom line.COMMERCIAL REAL ESTATE GROUP OF TUCSON specializes in representing tenants and corporate users across the United States, Latin America, Europe and Asia. For more information, call 520-299-3400.
medical / healthcare / bio / economic development / entrepreneurs / high-tech / research / start-up / technology / venture capital